As we age, we have short memory lapses and other “senior moments.” Misplace the car keys. Pause to remember a name. Wonder why we were looking in the closet.

We know we forgot something. In a moment or two, we remember.

That’s normal. Thinking slows with age.1 These senior moments are not early signs of Alzheimer’s.

When Should You Worry? 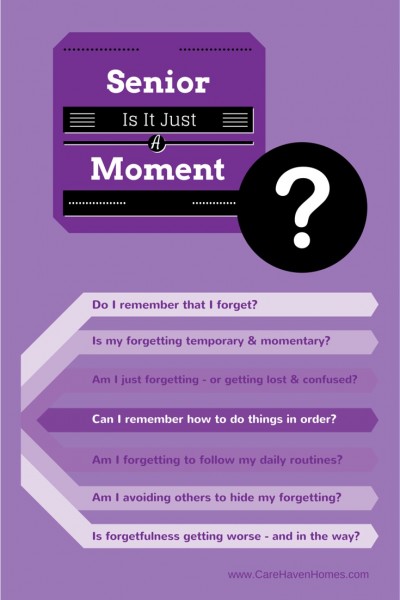 Alzheimer’s is the leading cause of the set of symptoms2 known as dementia. Dementia is caused by damage to brain cells. Head injury, toxins, disease and infection can cause dementia. Interruption of the brain’s oxygen, fluid or nutrient supply can cause dementia, too.

Memory loss is dementia’s best-known symptom. Dementia is not the mild forgetfulness of senior moments. It’s a major disruption of the brain’s ability to think and learn.

The earliest sign of Alzheimer’s is trouble recalling something you just learned. You have a long talk with a new neighbor. An hour later, you forget everything she said. You may not remember meeting her.

Other early signs of Alzheimer’s?

The symptoms get worse.

Memory loss is a symptom of dementia when

1. It gets in the way of normal, everyday life AND

2. It’s joined by new difficulties with

Doctors diagnose dementia if severe difficulties with at least two of the brain’s major functions interfere with daily life.3

If someone is dealing with dementia, you’ll probably notice sudden changes in his or her relationships with others. Has a loved one become uninterested in social activities?

The more sudden and severe the onset of symptoms, the more important it is to see a doctor.

Why bother, if the diagnosis most likely is Alzheimer’s’?

Skilled physicians can diagnose Alzheimer’s with a high degree of accuracy. If your doctor seems unable to explain the cause of serious memory loss, seek a second opinion. Look for answers and additional support from your local chapter of the Alzheimer’s Association.

1 “Forgetfulness: Knowing When To Ask For Help.” National Institute on Aging. US Department of Health and Human Resources, 23 Feb. 2015. Web. 27 Feb. 2015. http://www.nia.nih.gov/health/publication/forgetfulness

Thinking About Senior
Living Options?
Our SlideShare gives a quick overview. See your options, what they cost and how to pay for them. 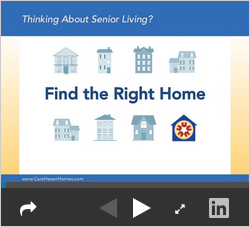