Top 5 List: What You Should Know About the Man at the Finish 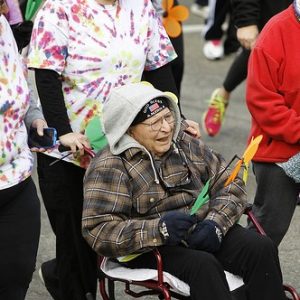 This is Bill, a Care Haven resident, ready to join our team for the 2013 KC Metro Walk to End Alzheimer’s.

At 87, he started the day as our oldest team member. He finished it as our inspiration – the one who literally took a stand against this devastating disease.

Here’s what you should know about Bill:

Bill enlisted in the Merchant Marines on December 7, 1943 – exactly two years after the bombing of Pearl Harbor. He was just 17 years old and not quite through with high school. He heard duty calling, and he signed up as soon as he was eligible to serve.

Bill finished high school after he returned from war. After graduation, he embarked on a 37-year career with the Post Office. For 20 of those years he also worked a second job – so he could provide for his 8 children.

“Provide” included supporting his children’s education. Each is a college graduate. Bill hopes his 16 grandchildren and 8 great-grandchildren will be, too.

2. He knows how to meet a challenge.

Bill has biked across the State of Missouri three times as a participant in the MS 150. He also trained for and ran a marathon while in his 60’s.

It may have been the KC Metro WALK to End Alzheimer’s, but we didn’t expect Bill to hike the 3-mile course. His daughter, Jane, had volunteered to push his wheelchair all the way to the finish.

But Bill is used to crossing finish lines on his own. As Jane neared the end of the route, Bill signaled her to stop. With the help of Care Haven caregivers Deonisia & Jeannine, and to the cheers of the crowd, Bill rose from his chair to finish the walk on his own two feet.

Suddenly the money we raised didn’t matter as much as the indomitable spirit of this proud man. All who watched grew misty-eyed. Bill literally was taking a stand against the devastating disease that had struck so many of his friends and fellow residents.

On October 5, we’ll again be walking to end Alzheimer’s.

Bill hasn’t decided how he’ll participate this year – but we’ve put his picture on our Official Team Page for inspiration. Check it out – and leave a few words of encouragement as we join the nation’s largest event to raise awareness and funds to fight Alzheimer’s disease.

If you’re able, please donate on behalf of our team, too. Together, we’ll advance research to treat and prevent Alzheimer’s – and provide support for over 5 millions Americans living with this disease – and the 15.5 friends and family members who care for them.

Thinking About Senior
Living Options?
Our SlideShare gives a quick overview. See your options, what they cost and how to pay for them.